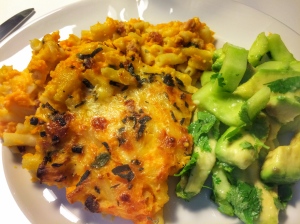 This recipe for Mac n Cheese is based on a Nigella recipe, that we have adapted and, in our opinion at Season’s Eatings, enhanced. The original recipe had sweet potato to which we have added pancetta and tweaked the quantities of ingredients. Sweet potato is in season throughout the winter, although is available year round in supermarkets.

This sweet potato and pancetta mac n cheese recipe serves 6 people, which we accompany with a cucumber and avocado salad.

This site uses Akismet to reduce spam. Learn how your comment data is processed.